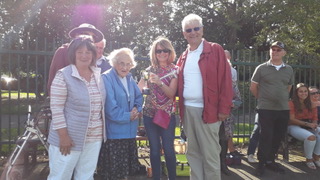 The following report of the Annual Match for The Sheppard Trophy for Bowls has been received from Donald Morrison. Our thanks go to Donald and Angela for their organisation and hospitality. 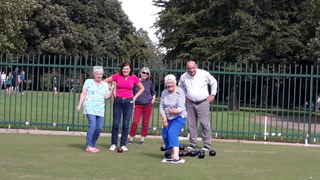 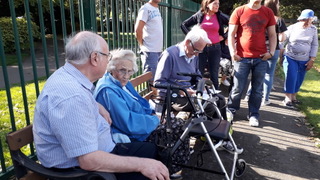 I have much pleasure in reporting that our annual competition was a most enjoyable time to share with many enthusiastic people. We were extremely lucky with the weather and despite the carry on with the gate code and the lack of jacks we managed to have an extremely good competition with 21 people attending. The result was extremely close and effectively decided by a team that gained 3 wins and one draw from 5 games to be just one point ahead of the next team.

The winners were Sandy Berry, Lorraine Lockerbie, Sue Davis and Trevor Wood. Betty Shepherd showed her enjoyment at the quality of play and supported quite a few of our competitors who had little or no past experience of bowling and who proceeded to make a really competitive competition. Attached are some photos of the afternoon including Betty’s presentation of the cup. Because we had 21 people who entered the competition it was thoroughly enjoyed and gave a slight surplus against the expenses.

We also enjoyed a tea or coffee and cake after, back at our house with a lively conversation about all and everything.

It was a great day and well worth organising.

One thought on “Bowls Match Report”

This site uses Akismet to reduce spam. Learn how your comment data is processed.