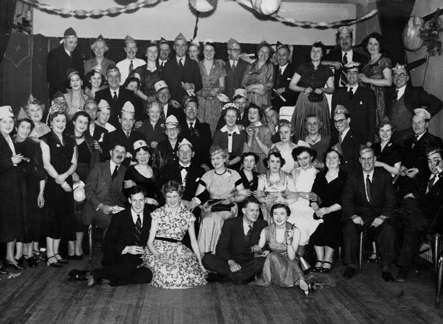 In March 1920, following the end of the Great War, when troops were returning home, a group of ex-patriot Scots, living in and around Northampton, met and in an effort to speed up a return to normality and prevent homesickness, agreed to form the Northampton Scottish Association.

The records show that a total of 127 men subscribed a total of £56.5s.0d (£56.25) to create the Association. Advertisements were placed in the Northampton newspapers of the day – The Daily Echo, The Chronicle and the Independent and so the Association was formed.

There was great consternation in 1921 however, when the organised Whist Drive ran at a loss but nevertheless £50 was invested in 6% Northampton Housing Bonds and badges were sold to members at 2/- each.

The Burns Night of that year made a profit of 10/6 and clearly the committee breathed a sigh of relief and agreed that subscriptions for 1921 should be fixed at 5/- (£0.25).

At the AGM in July 1936 there was a proposal that the Association be wound up due to the fact that various organised events had created a financial loss! The proposal was seconded but at an Extraordinary General Meeting called to discuss this matter it was agreed the Association would continue under a temporary executive council. Clearly they were successful and in April 1938 it was decided to purchase a ‘Badge of Office’ for the President. This incurred a cost of £12.5s.6d (£12.275) along with 15 bars at 5/6 (£0.275) each.

Early Charitable Donations are recorded as:

The Association has continued to thrive, holding the annual Burns Suppers, St Andrew’s Night Dances, President’s Nights and many other social events, whilst continuing to make donations to many local charities.

We are now in our 99th year and looking forward to our 100th birthday.