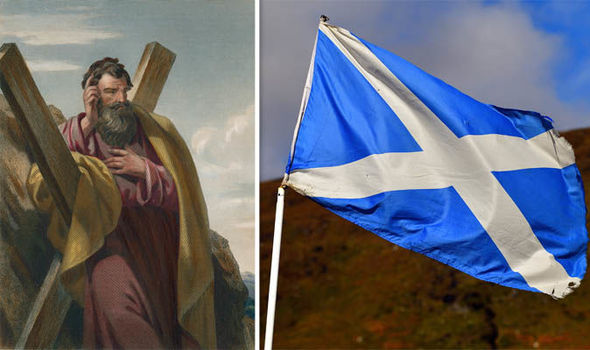 Scotland has the good fortune to have as its patron St Andrew, an apostle of Christ and the brother of Simon Peter. The choice of Andrew as the national saint of Scotland is a complex tale and requires detailed study of the historical period but we are led to understand that the relics of Andrew were brought from the Greek city of Patras to the coast of Fife to a place called Muckross which later changed its name to St Andrews.

The saltire (St Andrews Flag) as a recognised symbol of Andrew’s martyrdom, only came in to general use in the 11th and 12th centuries. One of the saltire’s earliest appearances is on the seal of the Cathedral Chapter of St Andrew in 1120. The Scottish use of the saltire as a symbol of national identity, grew up with the increasing importance of the cult of St Andrew as a national saint.

In 1318 King Robert the Bruce was present at the dedication of the newly completed St Andrew’s Cathedral. The King and his nobles presented many gifts at the shrine of St Andrew in thanksgiving for their victory four years later, at the battle of Bannockburn. The fact that it had been the relics of the more traditional Celtic saints Fillan and Columba that had been taken to the field at Bannockburn and not the relics of Andrew, is one of the interesting small puzzles of Scottish history. Perhaps in the minds of the Scottish people and their King, traditional Celtic saints were thought to have more power than that of St Andrew.

By the end of the Middle Ages however, there could be no doubt that Andrew and his cross meant a very great deal to the Scots. Both survived the Reformation as national symbols, although the shrine and relics were destroyed and dispersed.

The wonder of it all is that St Andrew walked and worked and lived with our Lord Jesus Christ and how amazing is that!