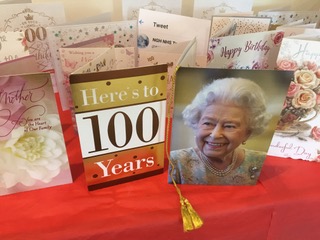 Congratulations to Betty Sheppard on her 100th birthday that took place on 24th June.

There aren’t many in our Association who does not know Betty Sheppard, a well known figure at all of our past events and a member for many years. Betty celebrated her 100th birthday on 24 June 2021 at Westonia Court where she has lived independently for the past nine years. She still does her own shopping at Aldi near her flat and also takes trips to the Weston Favell Centre. Betty, as many have commented, is always an immaculately dressed lady, “well turned out” as they say – and why not? Age should not deter this; Betty you’re a shining example to us all.

Her birthday started with Bernie Keith of Northampton Radio ringing her for a live radio chat and later with a party for the other residents. On the following Saturday afternoon, she had organised a garden party for groups of friends including a few of our Association. It was delightfully organised with one friend in charge of the background music, another on the photo shoots, whilst others were ensuring that everyone had enough food and refreshments. Richard, her friend and one of our members, had decorated the garden beautifully and most professionally with balloons etc. He also said a few words as well as read out a letter from Betty’s daughter in California before inviting Betty up to ceremoniously cut her birthday cake. Luckily the weather was fine.

Betty was born in Northampton and has lived here all her life. She and her husband, Ernie, enjoyed 69 happy years together. Ernie was a Scotsman and one of our Past Presidents (1976-77).
Betty, as ever, wanted to give our Association a gift to celebrate her 100th birthday and she very generously presented Robert Perkins, our Membership Secretary, a nicely designed horn handled skein dhu, suitably inscribed, to be used at our Burns’ Suppers to cut open the haggis during the recital of “To a Haggis” by Robert Burns. She took the skean dhu to Steffan’s Jewellers to be engraved and Steffan, amazed at her age, said we will engrave it now while you wait to save you returning to collect it. When she asked for the bill he said “Nothing to pay. We don’t charge 100 year olds!!” Robert accepted skean dhu on behalf of the Association and said few words recalling Betty’s years as a member and how she has been such an active and supportive member. Betty had made it known that she did not wish to receive gifts but if anyone so wished they could donate to the Stroke Association. I personally presented Betty with a cheque for this charity on behalf of all our members.

This site uses Akismet to reduce spam. Learn how your comment data is processed.